Next Shot expands its catalog 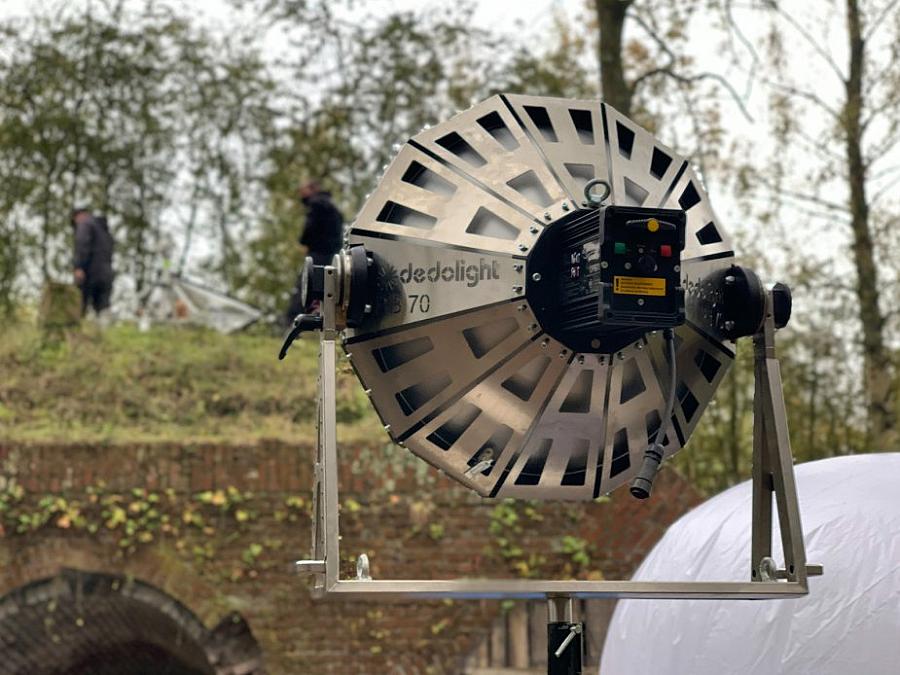 This 1200 W HMI source generates a powerful beam of light that can be used live or with Lightstream reflector kits. Its parallel beams allow to simulate several light sources without any loss. Very conclusive tests were carried out at the end of September with the Cartoni France team for the shooting of the "Germinal" series, directed by David Hourregue and photographed by Xavier Dolleans. 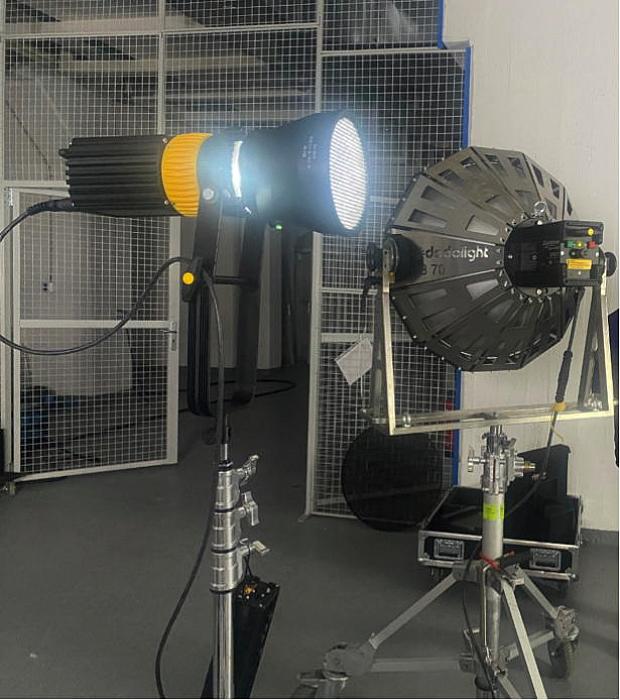 The DPB70 Tests carried out at La Cite du Cinema 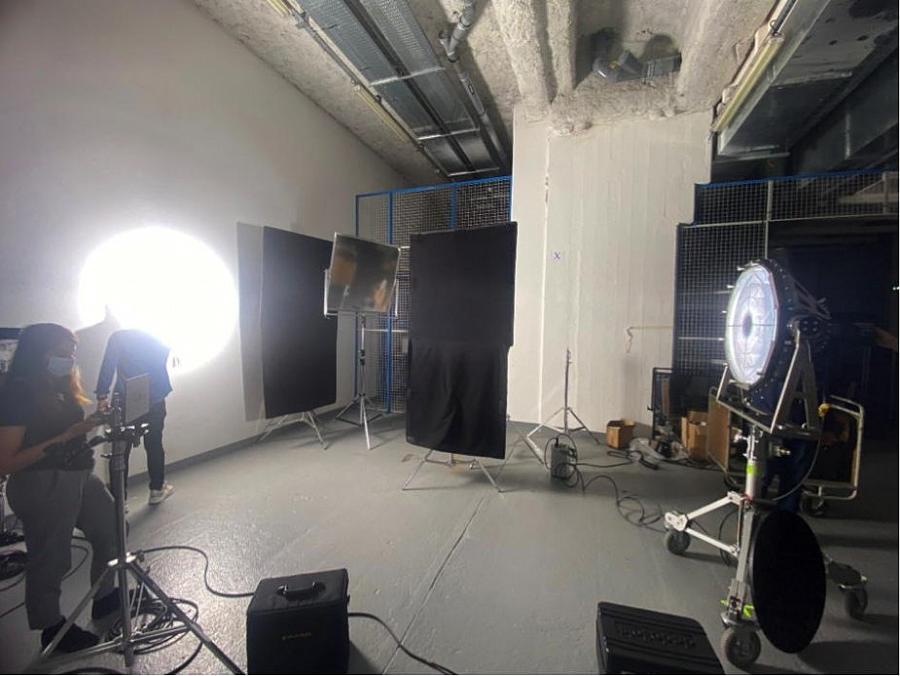 The testimony of Xavier Dolleans, director of photography on the shooting of "Germinal" at the Seclin Fort 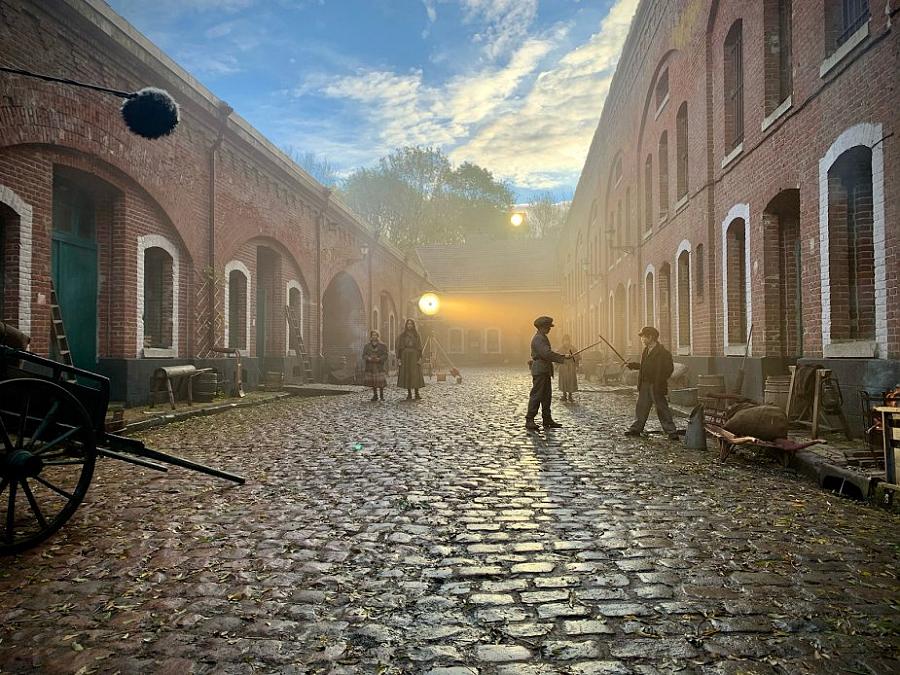 Photo courtesy: Xavier Dolleans (DoP)
Next Shot rental company, AFC (French Cinema Association)
"Germinal" series, directed by David Hourregue and photographed by Xavier Dolleans.
Xavier Dolleans : On "Germinal", we defined from the start, with director David Hourregue, a very precise "moodboard". Seasonality, landscape, western, contrast, smoke, deep blacks... precise references and marked atmospheres. In particular, I wanted the miners' environments outside the mines (settlements, bars, surface buildings) to be systematically "pierced" by beams of light, as if the contact with light on the surface could be painful for the miners, precisely because of the time spent at the bottom of the mine without light.

For this kind of very strong effect, my original idea was to go with Molebeams. Then I remembered the Lightstream range from Dedolight, which I discovered at a Micro Salon at the AFC. We did a day of tests with Anais Kieffert, from Next Shot, and Regis Prosper, from Cartoni, and I fell in love with this range! 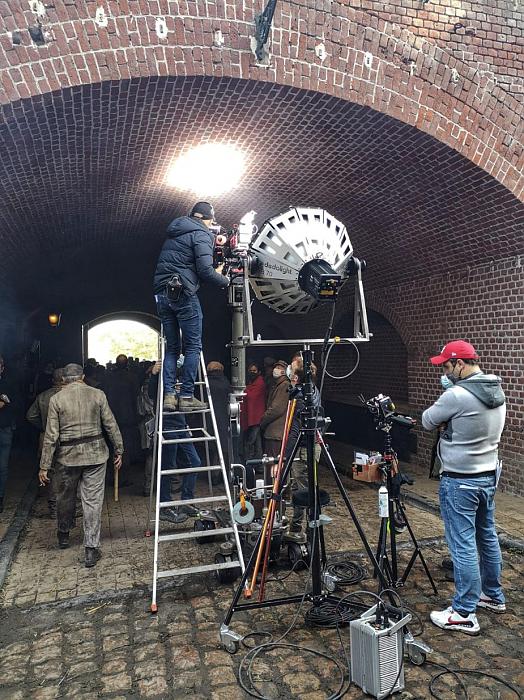 Photo courtesy: Xavier Dolleans (DoP)
Next Shot rental company, AFC (French Cinema Association)
"Germinal" series, directed by David Hourregue and photographed by Xavier Dolleans.
The DPB70 is very powerful and consumes only 1200W. Its light power is much higher than that of a Molebeam 1200. And above all, what is very interesting is its "parallel beam" reflector, which acts on the light beam by making it parallel to the output of the projector, giving the impression that the projector is located "at infinity", at least 20 m behind the position where it is actually located.

This trick in the manufacture of reflectors, coupled with the Dedolight range of mirrors, makes it possible, depending on the installation, to give the impression that the projectors are very far or very high! The gradation of light indoors becomes very natural, the actors can approach the windows without giving the impression of approaching the projectors. The power of the DPB70 also makes it possible to "pierce" the stained glass windows of churches and really light through them while keeping the beam effects.

We also use the DPBA range on Dedolight 400 HMI or on DLED 10. It is an optical system from the Lightstream range that amplifies the light beam optically by making it also parallel to the output of the projector (Parallel Beam Intensifier). I have to say that I got used to the very natural and powerful rendering of the beams, perfectly adapted to our desires of hard and intense light beams.
On the set of "Germinal" 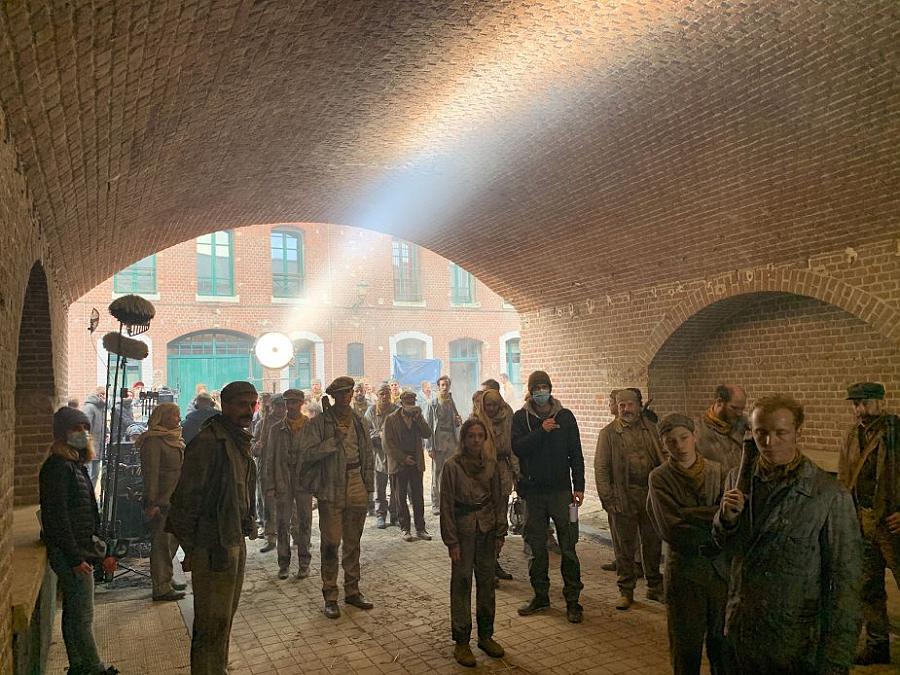 Photo courtesy: Xavier Dolleans (DoP)
Next Shot rental company, AFC (French Cinema Association)
"Germinal" series, directed by David Hourregue and photographed by Xavier Dolleans.
Combining these projectors with Dedolight mirrors of different densities is also very interesting. The mirrors (from 1 to 4) allow to spread more or less the beams, to play on the hardness of the rays. As "Germinal" takes place over several seasons, I got used to changing the mirrors to create more or less intense suns depending on the time of the year.

On the other hand, generally speaking, I like to use indirect cutting projectors (Source 4 tungsten, Bug a Beam 400/800, Source Four LED etc.), and for high power, I often asked Joachim Imbard, my chief electrician, for the Joker Bug 1600 + Bug a Beam, which is a rather rare accessory after all.

So the DPB70 has become for me the very concentrated projector that I can use in bounce on ceilings, in tunnels, churches, barns, all large volumes where classical cutouts are too small. It is very powerful and precise at the same time.

Dedolight's Lightstream range (Parallel Beam, Parallel Beam Intensifier, mirrors) allows me to work the way I like to work in light: by mixing very hard and intense live beams with reflections on multiple surfaces, allowing me to constantly maintain the balance between hardness and softness, which is so dear to me.

The testimony of Joachim Imbard, Chief Electrician The DPB70 is a very easy projector to work with at first. The "mirror" effect concentrated to the maximum allows us to have a really very directional beam that hardly spreads with distance and allows an extremely efficient "beam" effect. 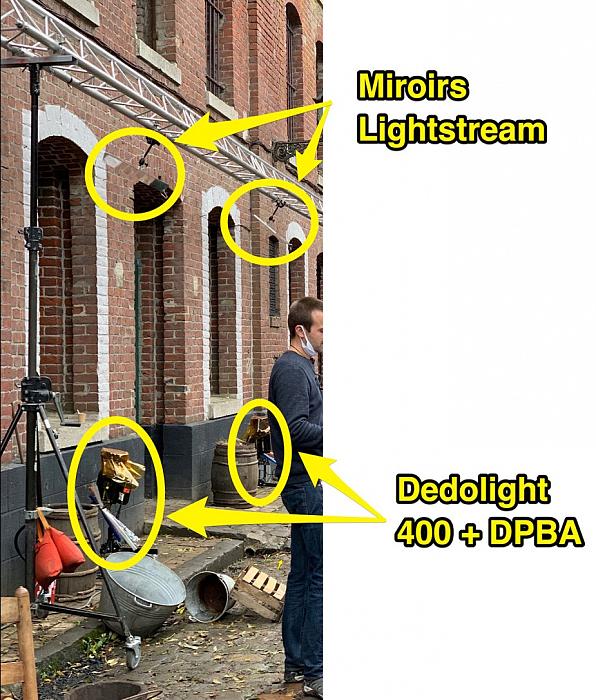 On the set of "Germinal"
Easy to install, it is also practical: 1200 W lamp, small and ergonomic ballast, 16 A connection, all of which means that installation and adjustment times are extremely short. Coupled with Dedolight's Lightstream mirrors, it allows for installations that were previously quite complicated.

The mirrors (with a reflective density ranging from 1 to 4) are also tools that blend perfectly with the hyper-directional effect of the DPB70. I might add that we also use DPBA heads a lot on the Dedolight HMI 400 W, as well as on the DLED 10 with the 50 cm mirrors for window entrances. They are part of the tools we use very regularly on this shoot.